Brian Robinson, one of our talented sales engineers, currently leads our ABB Variable Frequency Drive sales. His older brother, Dale Robinson, has been working on a new technology that could greatly impact the world of aviation. Dale is the CEO and owner of ElectronAir LLC, a start-up company in Connecticut that specializes in sustainable, green technology in the aerospace industry. Dale has been working on the design of a new battery charging system that could revolutionize the industry.

Eager to get involved and help out with this project, Flow Tech donated a VFD and motor that were both used in the prototype testing to help Dale achieve his dream. ABB played a crucial role in this project, as their components were key in the testing and development of the renewable aerospace invention. And, as of May 9, 2017, ElectronAir LLC was officially assigned the milestone USPTO (United States Patent and Trademark Office) Patent Protection for its ‘Regenerative System for Electrically Powered Aircraft.’ 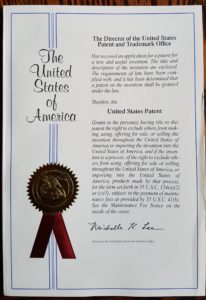 The front cover of the patent given to ElectronAir LLC.

“ElectronAir LLC’s regenerative system can make the Eviation world fly like an eagle.” ElectronAir’s website states. The system is a first-of-its-kind solution to a major issue facing the advancement of electric aircraft engineering — limited range, due to insufficient battery capacity.  The system uses kinetic energy from the propeller blast beneath the cowling of a general aviation aircraft, like a Cessna 272, in flight to charge on-board batteries with a permanent magnet generator and centrifugal fan.  The squirrel cage fan produces minimal drag — the PMA can produce 2000 watts. ElectronAir used The Whitmyer IP Group in Stamford Connecticut for the patent prosecution, and Victor P. Lin, formerly of NASA, was the patent agent. 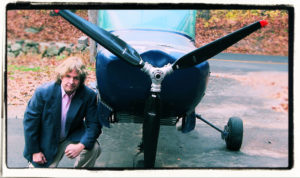 Dale Robinson kneeling next to the Cessna time machine used for prototyping.

Testing was done on a Cessna 152 fuselage-mule, the propeller driven by a Baldor 10hp Reliance Super E AC Motor, and controlled by an ABB Variable Frequency Drive Model ACS550-U1-024A2.  This enabled the company to establish accurate parameters measuring power needed to create the prop blast, and the resultant energy produced. From those numbers, one can extrapolate the performance expected in flight. 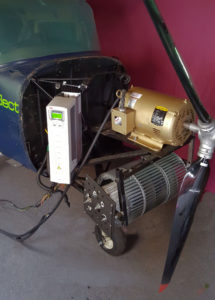 “Couldn’t have done it without the ABB equipment from Flow Tech,” said inventor Dale Robinson.

Click here to see the complete patent, which the company hopes to sell to a government or aerospace firm.  “The claims are so broad that they protect against many embodiments that may appear in the future,” Robinson said.

To learn more about ABB and their variable frequency drives, feel free to contact us, or visit our website. Remember you can always stay up-to-date on the latest industry happenings by following us on social media: Twitter, LinkedIn, Google+ and YouTube!