Today’s post was featured in the CT ASHRAE Newsletter’s History Report. It was written by the Chapter’s Historian, Rich Melo of M J Daly. Seeing that tonight mark’s the Chapter’s Past Presidents’ Night and last dinner meeting of the 2015-2016 year, we thought it would be a nice feature to include on our blog.

Most engineers know what a psychrometric chart is and depending on their discipline utilize them quite often. Our very own Mike Davis relied on the use of psychrometirc charts in his recently published white paper, “Controlling Wrap-around Heat Pipes for Systems with Strict Space and Humidity Requirements.” So why not learn the history behind them?

Willis H. Carrier (1876-1950), known as the father of air conditioning, was the inventor and installer of the world’s very first air conditioning system in 1902 (however, air conditioning was a term that was not coined until 1906 by a textile executive named Stuart Cramer). Although this brilliant engineer benefited from many pioneers that brought the study of psychrometric properties into tabulated forms of use (Isaac Newton, James Glashier, and William Ferrel…not to be confused with the comedian Will Ferrell…to name just a few), he was the first to devise a graphical chart, with which an engineer can quickly analyze the psychrometric processes.

Psychrometrics is defined as the physics which deals with processes and properties of moist air (mixture of dry air and water vapor). By 1903, Willis H. Carrier completed the world’s first scientifically based air conditioning system, which was designed to control humidity. This was accomplished by designing the system based on estimates of space moisture gain, heat gains, and estimated psychrometric properties of air. Rather than going through this painstaking calculation process for every air conditioning design, he used Professor Charles F. Marvin’s psychrometric tables for obtaining the vapor pressure, relative humidity, and dew point temperature, and created a graphical interpretation of this data. The results can be seen below in Carrier’s first published version of the psychrometric chart, which he entitled the ‘Hygrometric Chart” (1905). Carrier created the first version of the psychrometric chart in 1904, but the prototype version was not found after performing extensive research (If anyone knows the whereabouts of this prototype please contact the historian for the CT chapter). 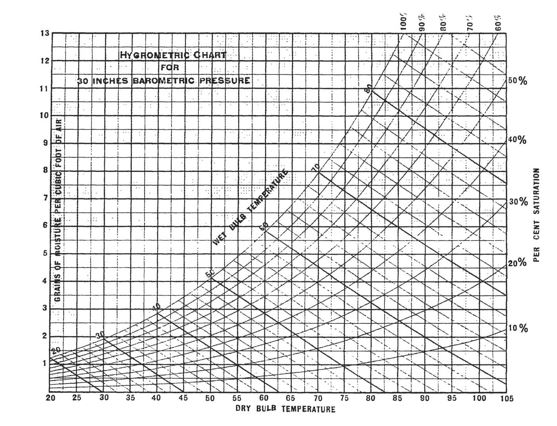 This first published chart allowed a user to obtain the dry bulb temperature using the vertical lines across the x-axis. The grains of moisture could be obtained by using the horizontal lines across the y-axis (grains of moisture per cubic foot were the commonly used units at this time). On the right side of the graph, the percent saturation curves are defined (which is now defined as relative humidity). Lastly, the wet bulb temperatures are depicted, using angular lines progressing at 5° Fahrenheit increments.

The psychrometric chart was further analyzed, researched, and improved upon between 1908 – 1911, and the y-axis was changed to specific humidity, carrying the units  (lb H2O)/(lb dry air) or (grains H2O)/(lb dry air) [which can be converted from the former using 1 lb H2O = 7000 grains H2O ]. Specific humidity was later changed to the currently used term, humidity ratio (shown below in the published and most current ASHRAE psychrometric chart). 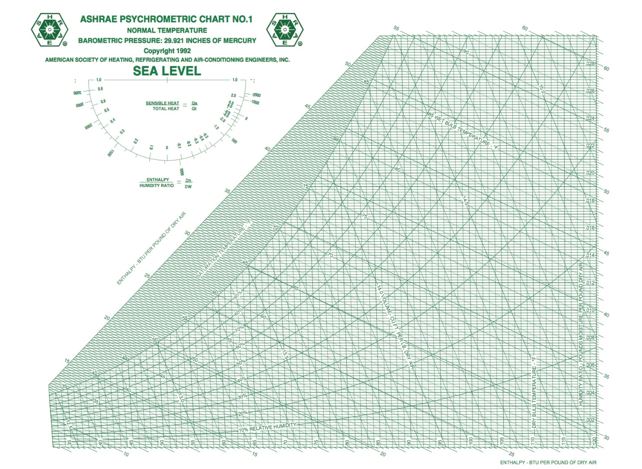 After continuous research, Carrier concluded that the experimental data in Professor Marvin’s tables matched his calculations of wet bulb temperature, thus verifying and validating the use of his psychrometric charts for engineering. Engineering principles of mass energy balance proved that the latent heat gain of the air is equal to the sensible cooling of the air, which is the product of the latent heat of evaporation and the mass of water evaporated at the wet bulb temperature. Using the water vapor properties, knowing the barometric pressure, and the entering dry bulb and wet bulb temperatures, Carrier could then calculate the psychrometric properties. Using the Psychrometric Chart made this process an easier task for himself and all following HVAC Engineers since 1904.

Nowadays, computer software has taken the place of the use of the psychrometric chart (which unfortunately is hindering some of our younger engineers and engineering students to truly understand the processes). However, this software has greatly increased calculation speeds and accuracy. Nevertheless, we should all appreciate Willis H. Carrier for all of his hard work, dedication, and contributions to the HVAC industry.