When you think of Oktoberfest you typically picture steins overflowing with beer, wursts, and pretzels, music, contests, and let us not forget men celebrating in lederhosen and women in traditional Bavarian garb. We’re happy to report that the 4th Annual Flowtoberfest pretty much nailed the typical Oktoberfest image right down to the lederhosen! Keep reading to get a recap of Flow Tech’s annual customer appreciation event – Flowtoberfest 2017! 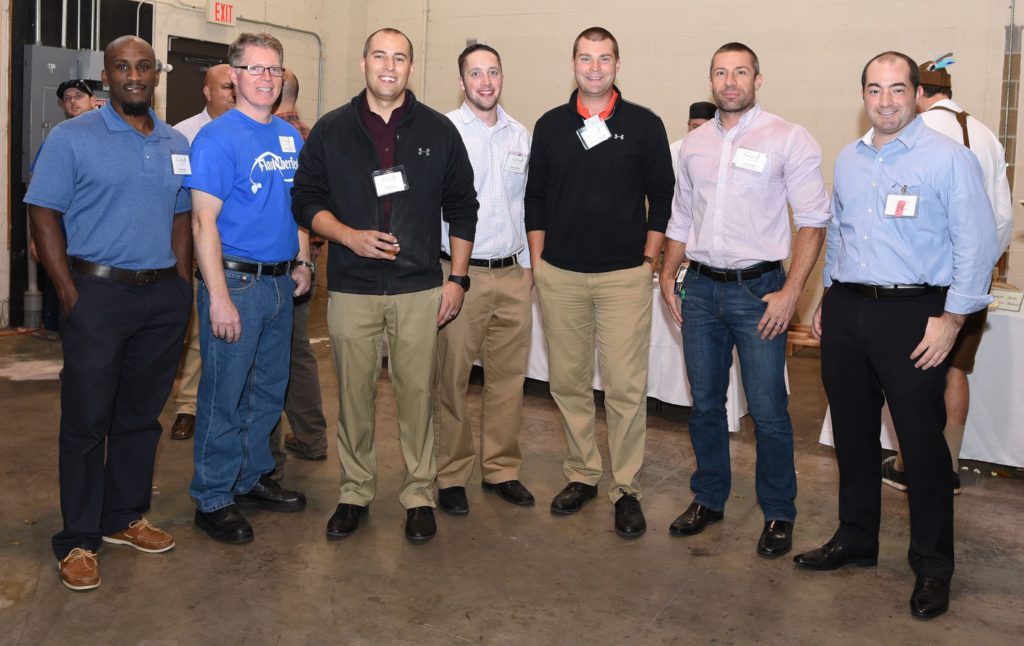 Some of BVH’s crew with Scott Glazier.

Although present-day Oktoberfest starts the third weekend of September and runs through the first Sunday of October, we like to keep it authentic here at Flow Tech by hosting Flowtoberfest during the week Oktoberfest got its start (October 12-17, 1810). This year’s event was on Thursday, October 19, 2017, from 4:30 PM to 8:30 PM. In order to keep things fresh and exciting for our guests, we changed the venue for the first time in 3 years. This year’s Flowtoberfest was hosted at Waypoint Spirits Distillery in Bloomfield, CT.

Fun photo props were scattered around the venue.

The change in venue also provided a change in amenities and refreshment offerings. Waypoint has a front lobby and bar where upon arrival, guests were delighted to be greeted by Mike Davis and Nichole Petersen rocking Bavarian-style outfits. The front of the venue also provided a bannered back-drop and props for photo opportunities, provided by Party Your World, and a Sangria bar. Guests enjoyed the addition of unlimited samples of Frau Petersen’s Cidergria and her take on the traditional Gluwhein. 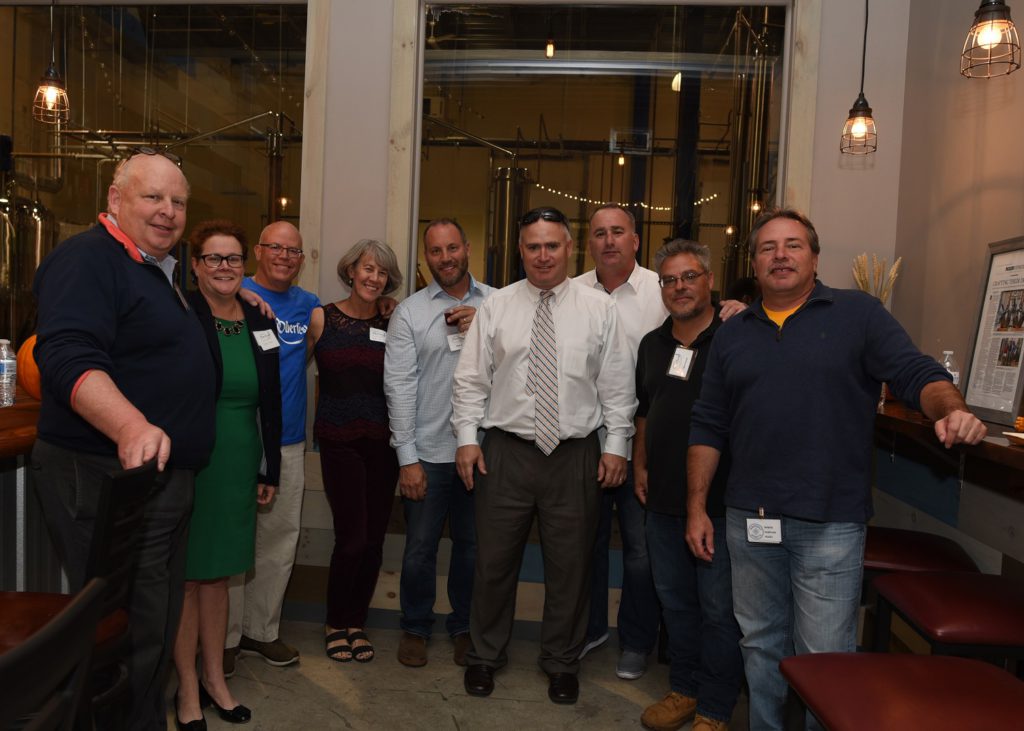 All smiles at the front Sangria Bar. 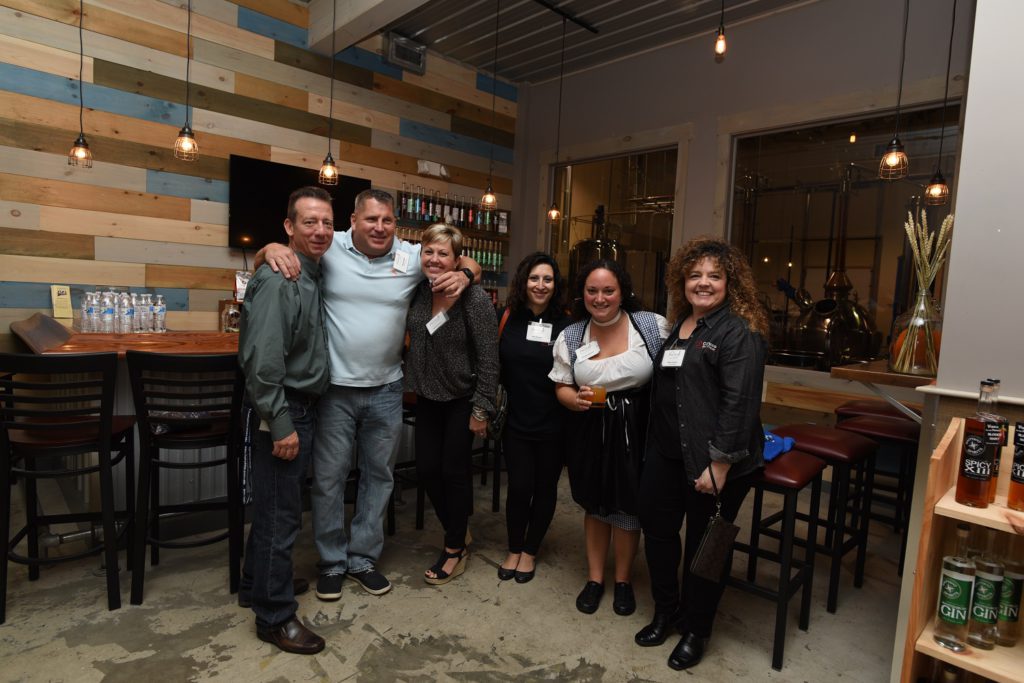 The back of the house or warehouse and distilling area was where most of the action took place. Guests were able to sample the many varieties of Waypoint’s spirits and also enjoyed local beer samples throughout the night. The Republic Gastro Pub, also out of Bloomfield, returned as the Flowtoberfest caterer for the 4th year in a row compliments of our variable frequency drive manufacturer, ABB. The Republic’s food is definitely a crowd pleaser! This year they brought back some people’s favorites and added a few new items into the mix. Some of the menu items included spicy wursts, soft pretzels with beer cheese, truffle parmesan popcorn and much more! 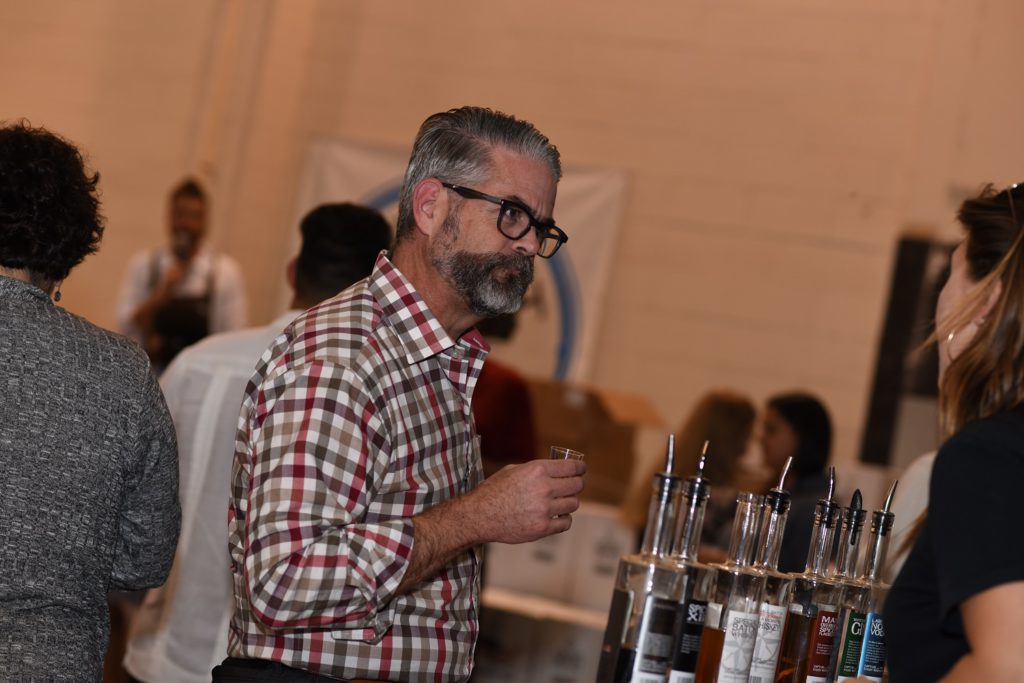 If we could hear what Brent Robertson said, it would probably be, “Mmm, yummy.” as he sampled some spirits.

Aside from the libations guests enjoyed a variety of activities while listening to a carefully created playlist thanks to Flow Tech’s other lederhosen-wearing employees, Evan Benoit and Kevin Wixom. A crowd favorite was corn hole, as well as a new raffle opportunity for all those that registered prior to October 1st. Each of those early responders had an opportunity to enter into a special drawing if they sank a cup in our mock Beer Pong/Beirut game. The four lucky winners of the Early Responder Raffle won a gift pack featuring an Air Enterprises travel coffee mug, k-cups, seasonal Yankee Candle, Godiva chocolate and trail mix. 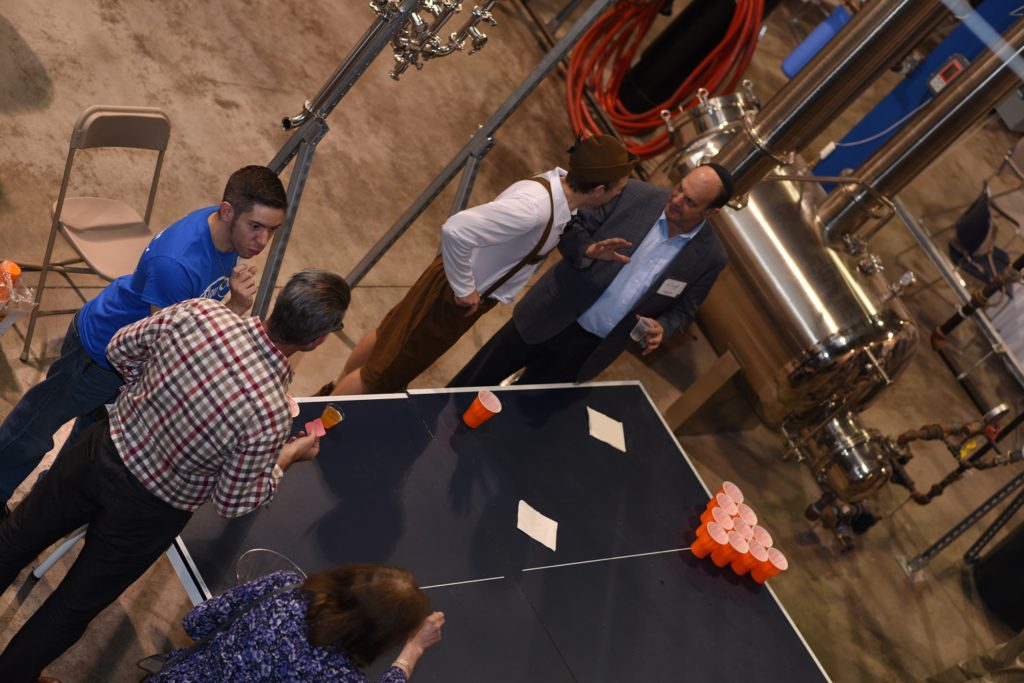 Kevin Wixom and Andrew Marques explain the rules of the Early Responder raffle as Ruth Millward makes her shot. 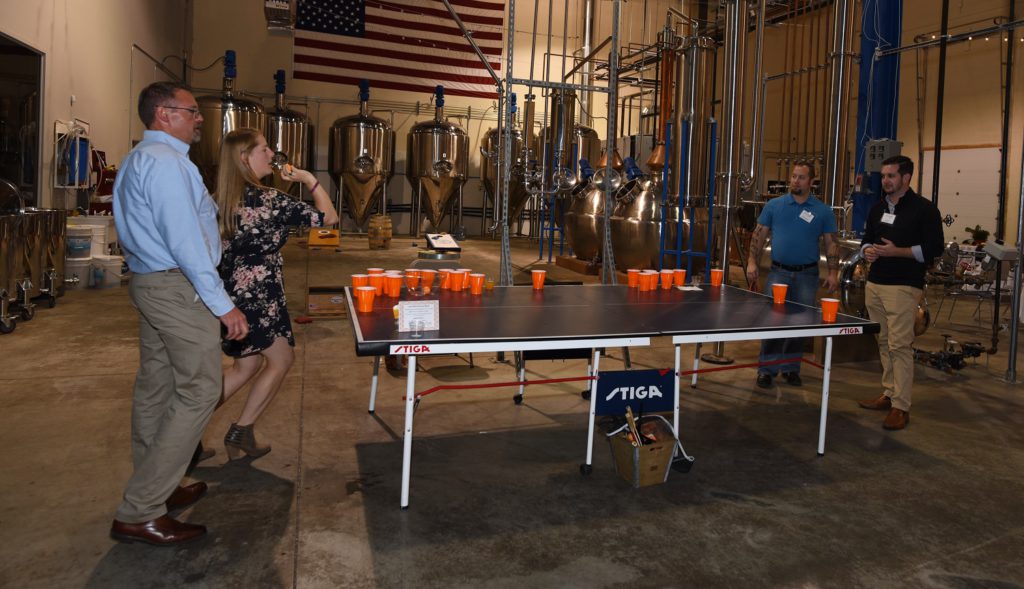 At the end of the night, guests had fun playing some pong.

The most hyped activity of the night was definitely the Stein Holding Competition. New to Flowtoberfest in 2016, this contest always brings laughs and good cheer with it. This year we had 18 participants all armed with 20 oz. glass steins filled with water (we don’t waste beer). At the sound of “go” each contestant raised their stein out in front of them with a fully extended arm held at a 90-degree angle. Last year’s contest brought on some controversy with improper form so this year Frau Petersen regulated the floor eliminating contestants as they spilled their stein or broke proper formation. 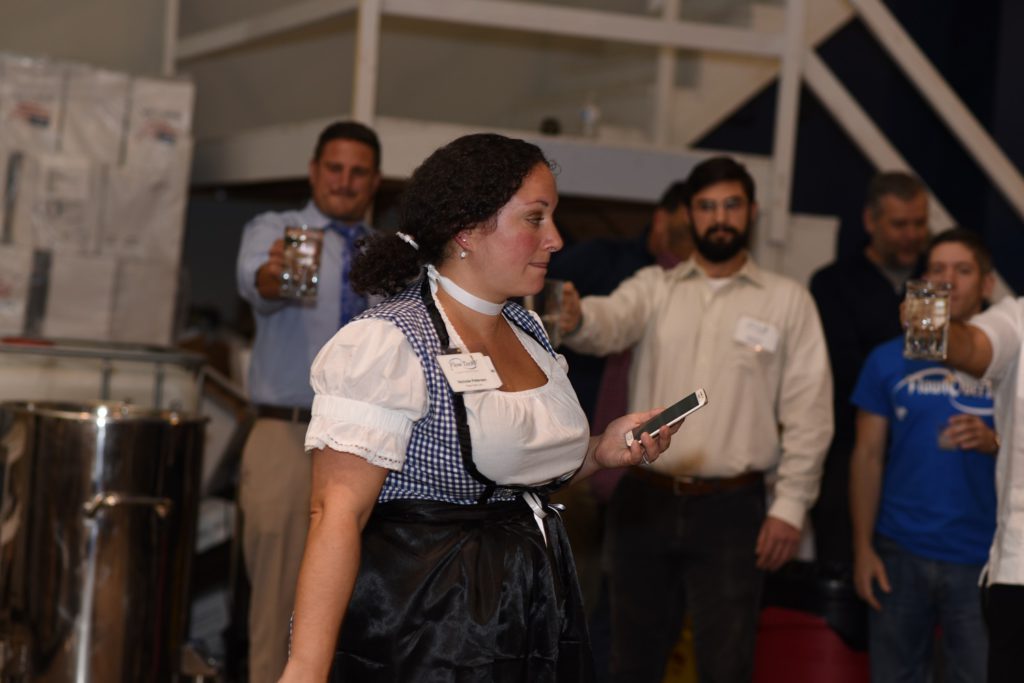 You can’t slip a bent arm past Frau Petersen.

After a few minutes the last women standing was Angela Carlson from QA+M Architecture, and after a little over 6 minutes the last man standing was Phillip Birns from AKF Engineers. Each winner will be mailed an official Flowtoberfest Stein Holding Certificate, has bragging rights for the next year and received a Waypoint liter bottle, pint glass, and official Flowtoberfest 2017 T-Shirt. 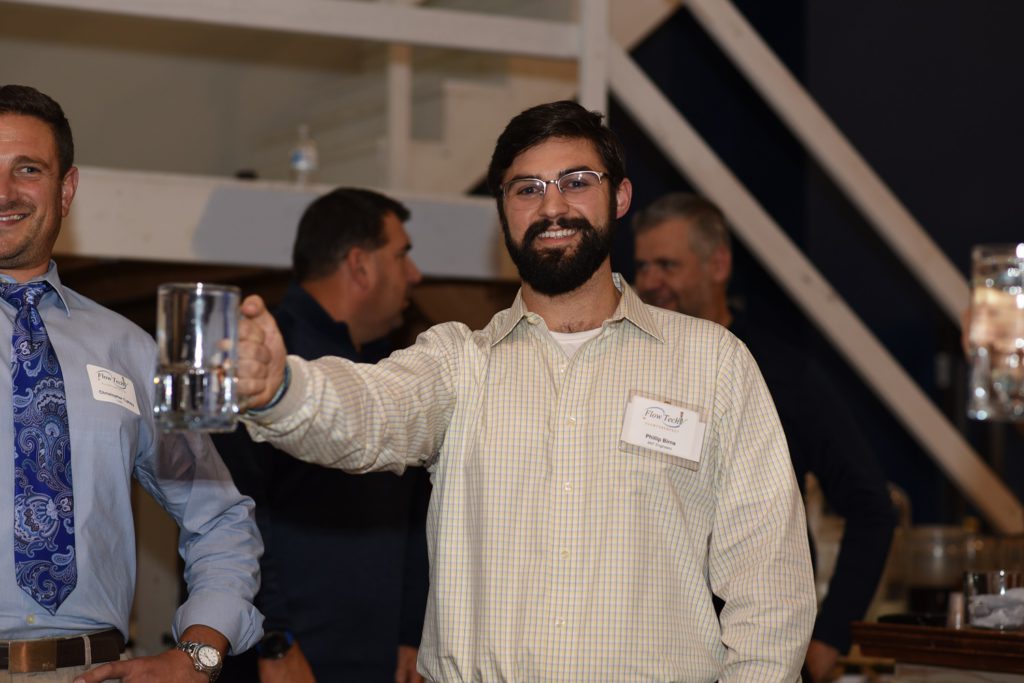 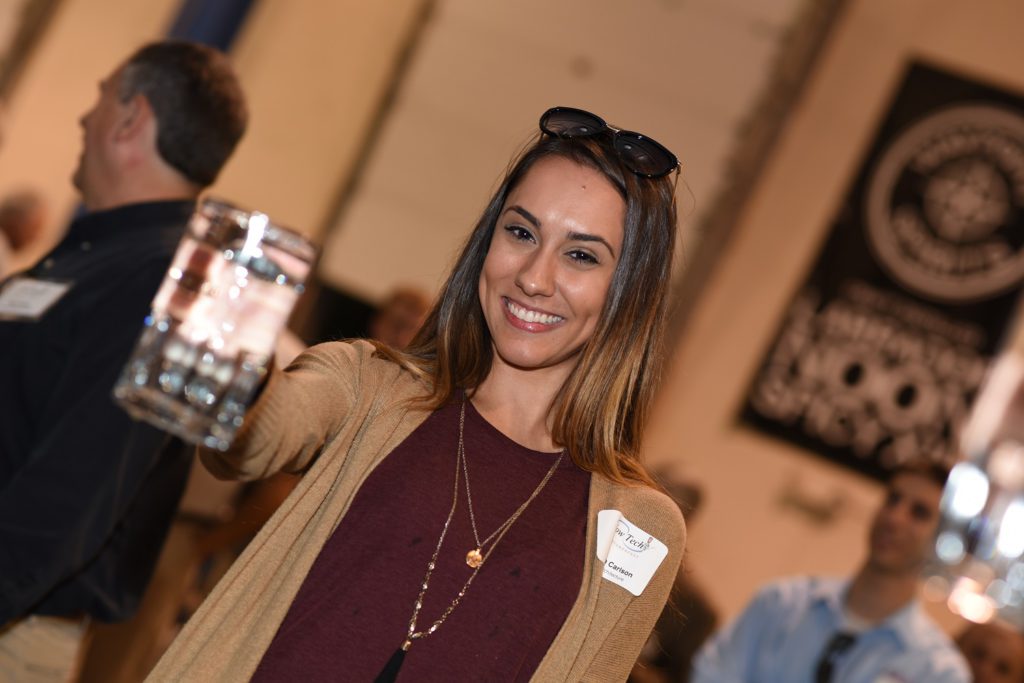 The final special event was the distribution of the raffle prizes. Thanks to our manufacturers and vendors we were able to give away 11 raffle prizes with values ranging from $100 to $300+. Everyone waited with baited breath as Rich Harper called out each lucky recipients’ names. Congratulations to all the winners, we hope you’re enjoying your gifts. The raffle prizes and sponsors were as follows: 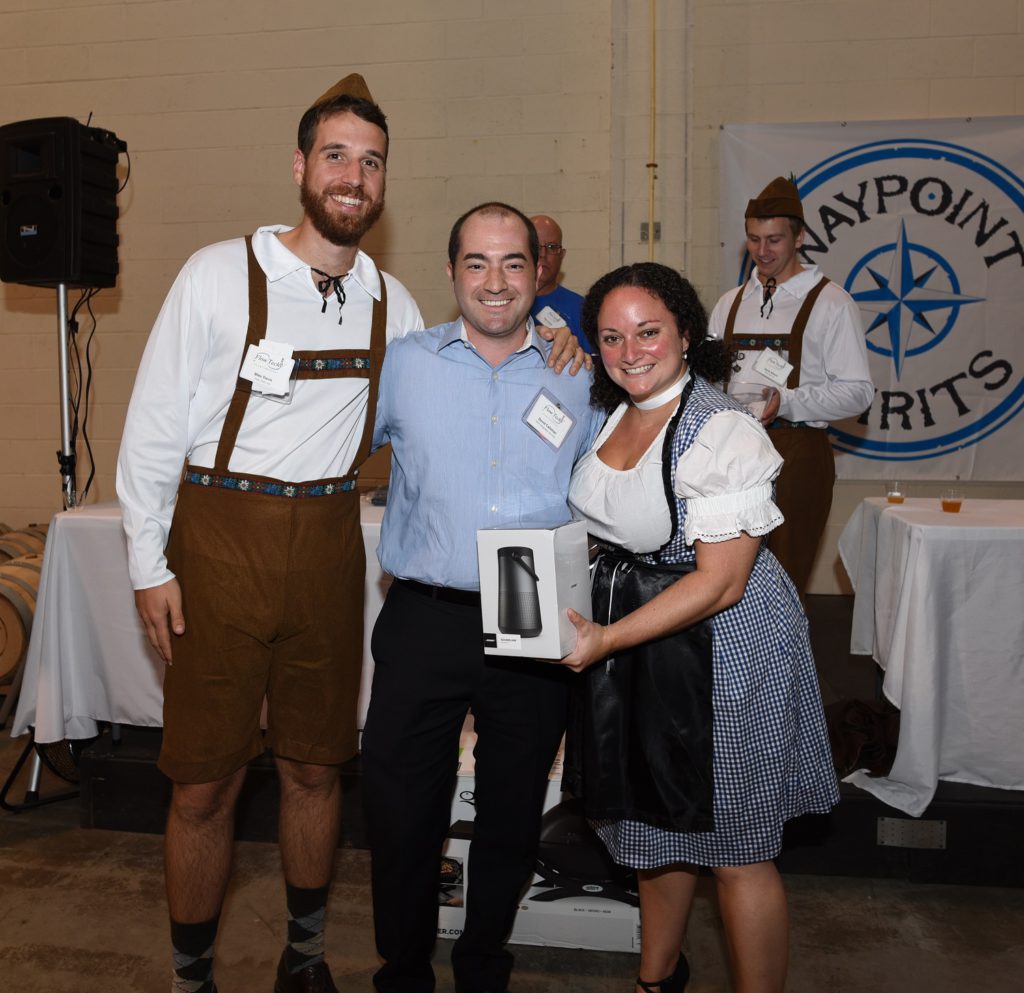 David Callahan was the lucky winner of the Bose Speaker sponsored by HPT. 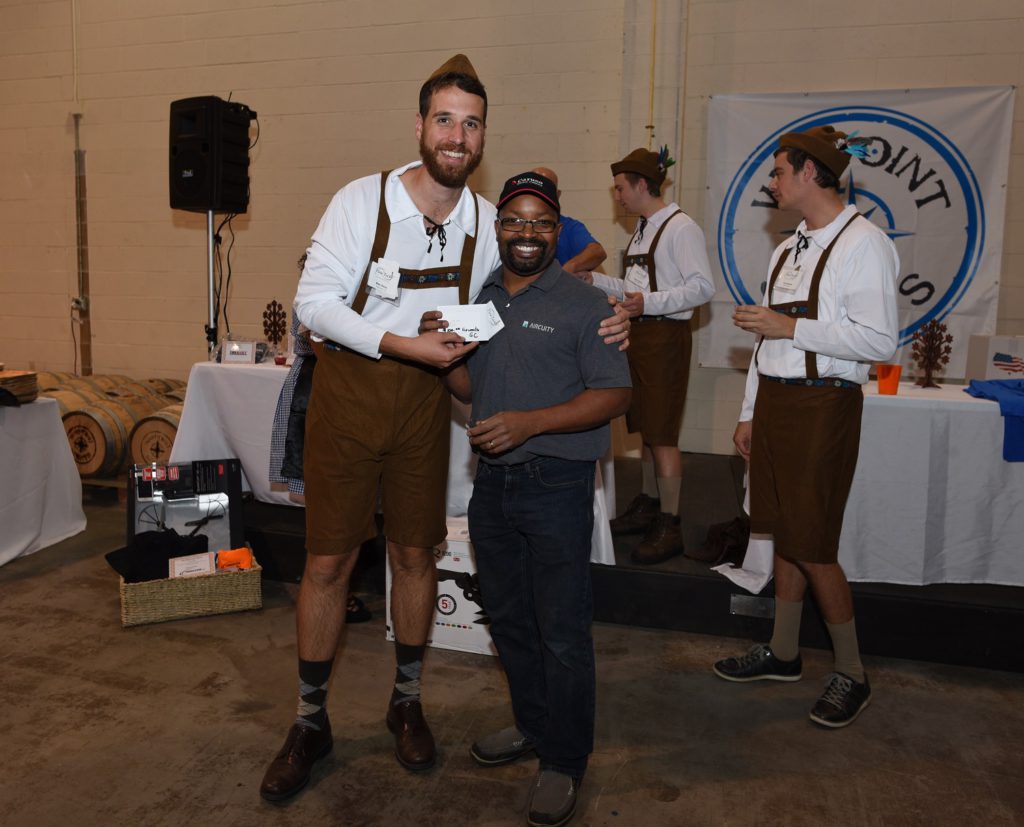 Theo Brewton was one of the lucky Foxwoods gift card recipients sponsored by TMI Climate Solutions.

Although not everyone was a raffle prize winner, everyone did leave with a favor. This year’s attendee gift was a commemorative Flowtoberfest-branded rocks glass for sipping their favorite spirit. 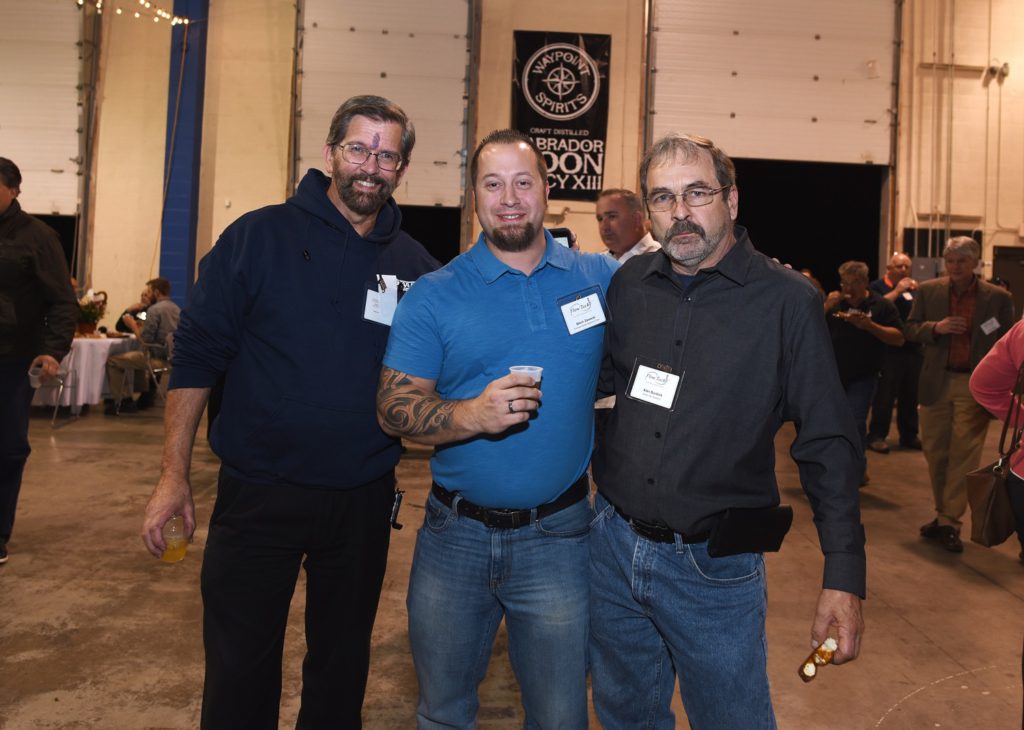 The 4th Annual Flowtoberfest was a night filled with laughs, competition, and memories thanks to all the great people who attended. We’d like to thank everyone who made it out last week and encourage everyone to save the date for next year’s event – Thursday, October 18, 2018. Without all of you, there wouldn’t be a Flowtoberfest! 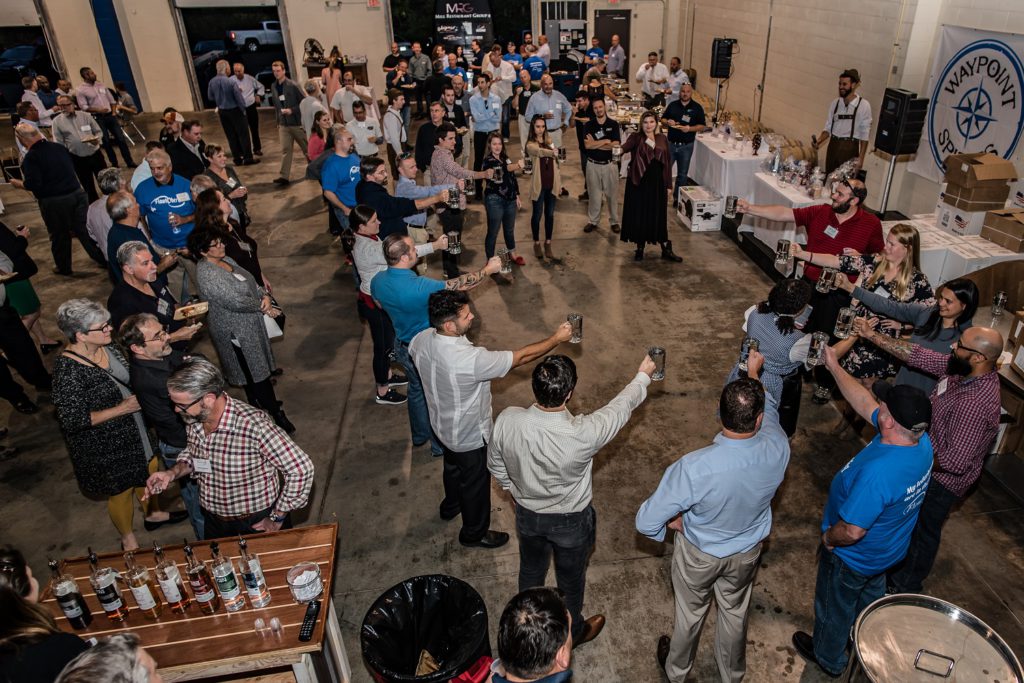 A bird’s eye view of the stein holding competition.

Also a very special thank you to our photographer April Smith of April A. Photography for all the great moments she captured. Stay tuned for next week’s blog post about the vendors behind the success of Flowtoberfest and keep a look out for the complete event picture slideshow post in the weeks to come. 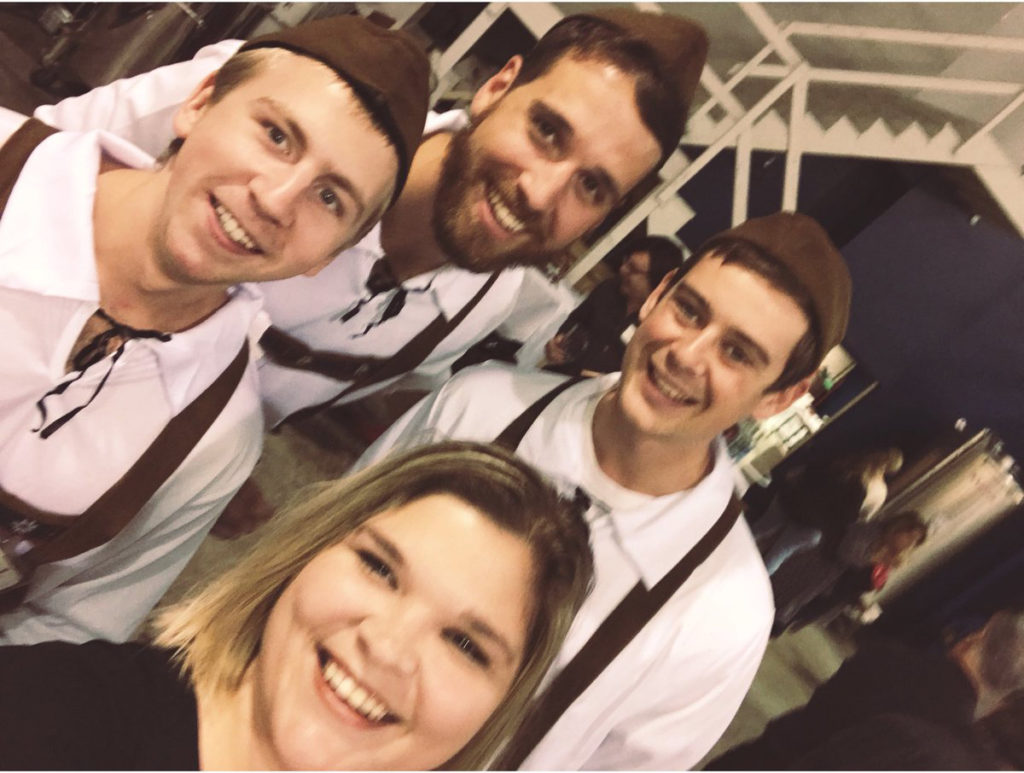 During the event we encouraged #LederSelfie. Thanks for this gem Sam VanSchoick!

We’d like to remind everyone of our #TweetForACure campaign. During the month of October for every new follower, we receive on social media: Twitter, LinkedIn, Google+ and YouTube, we’ll donate $10 to the Susan G. Komen Cause for a Cure Foundation. If you’re already following us on social media but still want to help, mention #Flowtoberfest or share a picture from the event in your next post. For more information about our event marketing, or Flowoberfest feel free to contact our Director of Marketing, Nichole Petersen. If you’d like more information about our products and services please call 860.291.8886 or visit us on the web.

Finally, for those of you wondering why the rest of the Flow Tech crew didn’t have on lederhosen, well like the back of their Flowtoberfest shirts said, theirs were in the wash! 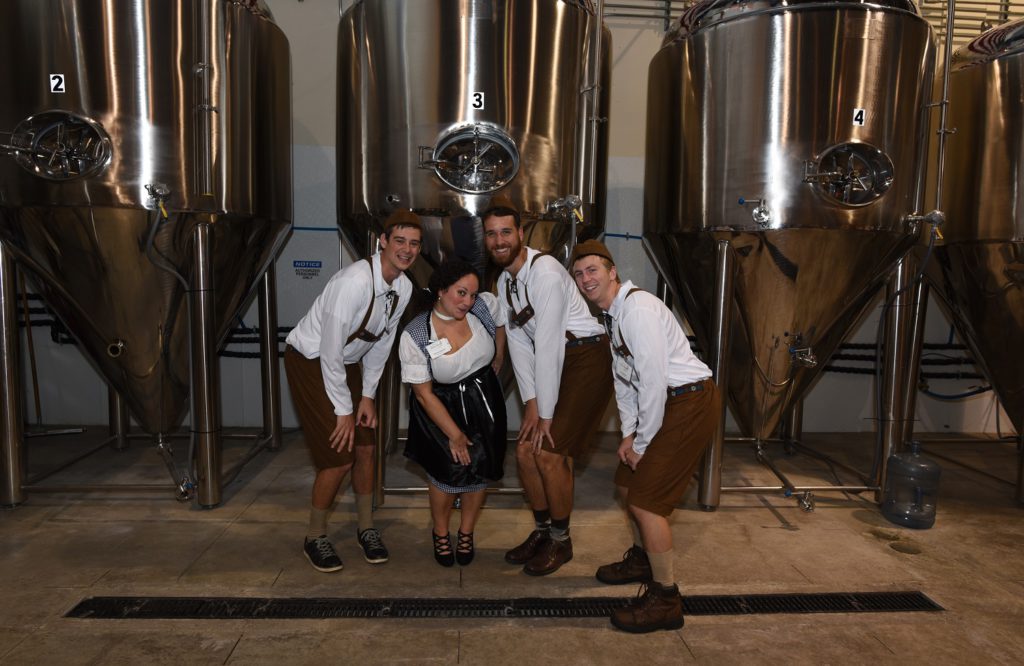