This past May, SecureAire presented the results from its latest study on Particle Control Technology which was conducted in a hospital operating room. The study was presented by Dr. Mark Ereth, Emeritus Professor of Anesthesiology, Mayo Clinic College of Medicine and Don Hess, Chief Technology Officer of SecureAire. SecureAire has since compiled this data into a white paper entitled, “Reduced Particle Load in Operating Rooms, Airborne Pathogens Killed, and the Elimination of Infections. Below is the complete white paper…

The human body can last nearly thirty days without food, three days without water, but you will die in three minutes without air. We must continually breathe, every minute of every day. You cannot defer breathing until you’re certain to be in a clean air environment. Today 90% of us are spending greater than 90% of our time indoors (1). In many buildings in most cities, indoor air quality (IAQ) is now worse than outdoor air. The primary pollutants (indoor and outdoor) and most airborne pathogens are exceeding small in size, less than five microns in diameter. The smallest of these are not removed by traditional filtration methods. The latest research has documented that particulate air pollution (indoor and outdoor) is associated with cardiovascular disease, declining cognitive function, dementia and Alzheimer’s disease (2). Particulate air pollution is responsible for 14% of dementia worldwide and as in tobacco smoking, there is no safe threshold of exposure (3). Each and every breath of air contaminated with pollution and airborne pathogens increases your risk of disease. This is no more critical than in hospitalized patients that are at risk for hospital-acquired infections (HAI’s) with the many who are immune compromised. These HAI’s affect millions of patients, kill nearly 100,000 each year and cost the United States healthcare systems between $10-30 Billion annually. Existing hospital, intensive care units, and operating room ventilation systems (including HEPA filtration) do not remove the smallest particles nor inactivate deadly pathogens (4). 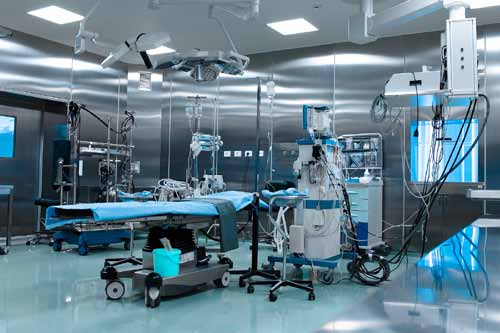 SecureAire embarked on the development of a technology platform to address the critical issues of Indoor Air Contamination within the Healthcare Environment. This included laboratory, independent and live operating room studies.

Active Single Operating Room Comparison: In a mid-size community hospital a standard operating room, 20’ x 23’ x 10’ was studied. The ventilation system consisted of a multiple down draft air intake with 16 air exchanges per hour and included HEPA filtration. Operating room airborne contamination levels were measured for a total period of four weeks with two successive weeks of similar surgery activity. The control week used existing ventilation alone. The treatment week was identical with the exception of the addition of the SecureAire ACS portable APS-1000X unit.

Impact on Infection: In a single outpatient orthopedic surgery center particle contamination loads, measured Total Volatile Organic Compounds (TVOC’s), and annual infection rates were compared before and after installation of a SecureAire System.

Active Adjacent Operating Room Comparison: The operating room with a pre-filter and the SecureAire ACS MERV 15 system achieved a 96% reduction in particle counts (> 0.4 microns) for six consecutive days when compared to a pre-filter, MERV 14, and HEPA filtration system. 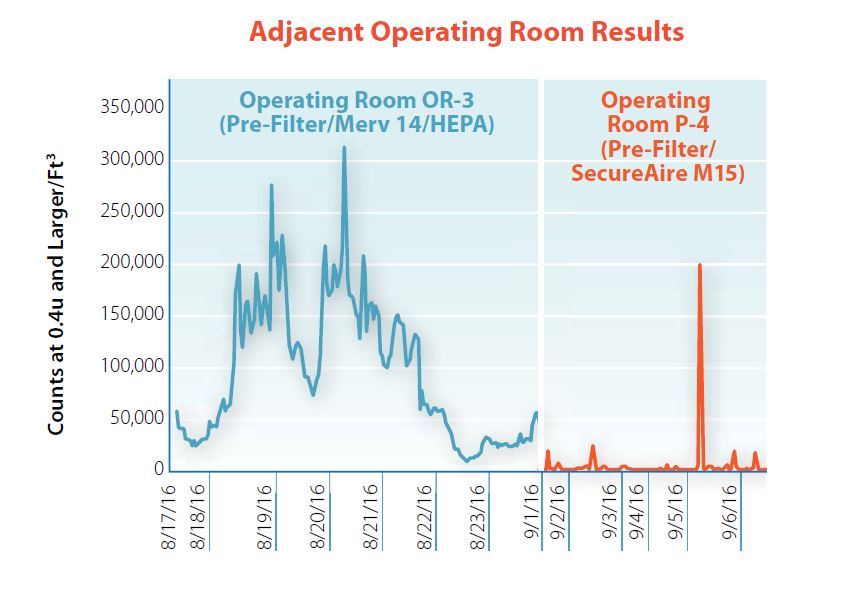 Pathogen Killing Study: Exposure of Bacillus subtilis cells to the electric field of the SecureAire ACS system reduced total viable cell count by 90-99% within three hours. There was no bacterial viability documented beyond three hours. 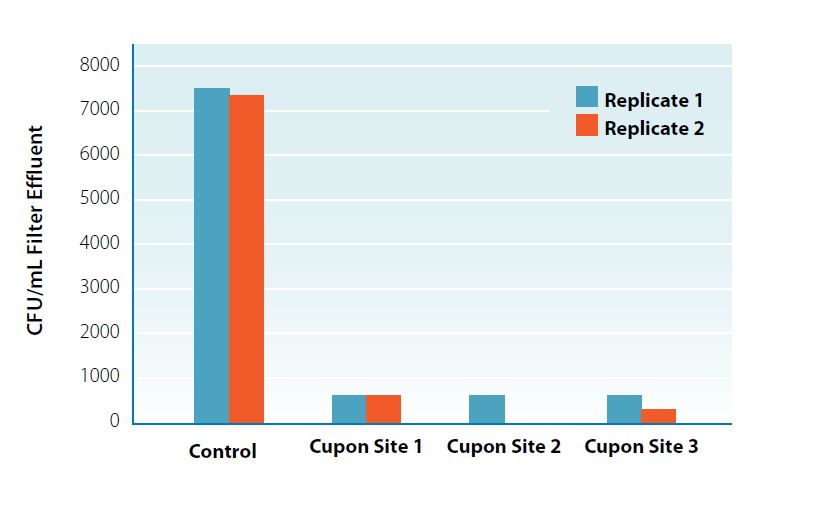 Active Single Operating Room Comparison: The addition of the SecureAire ACS portable APS-1000X unit into an active operating room resulted in a 49-94% reduction in airborne particle load at all times and during and after surgery (p=0.019, 0.056, and 0.085). 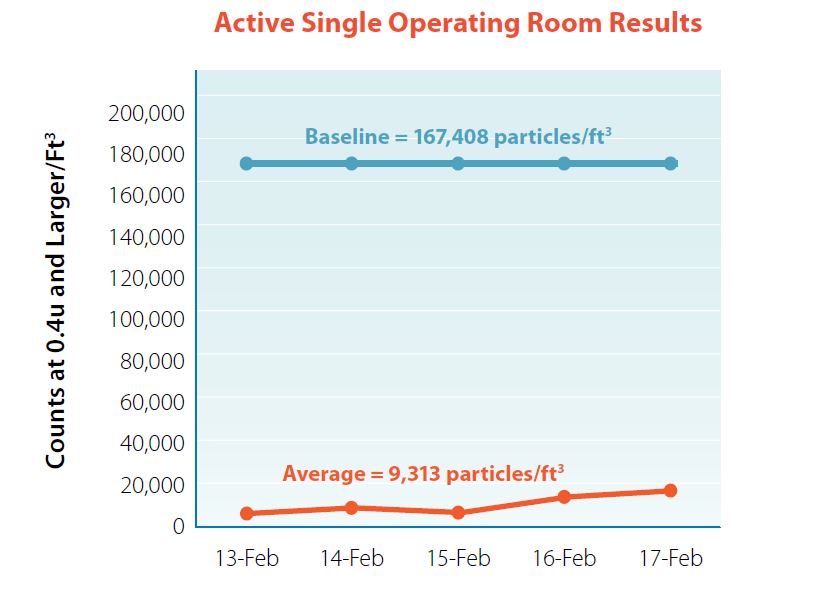 Impact on Infection: The installation of SecureAire system in an outpatient orthopedic surgery center quantitatively reduced particle contamination loads and significantly reduced TVOC concentrations, which directly translated to an infection rate of a “Zero.” 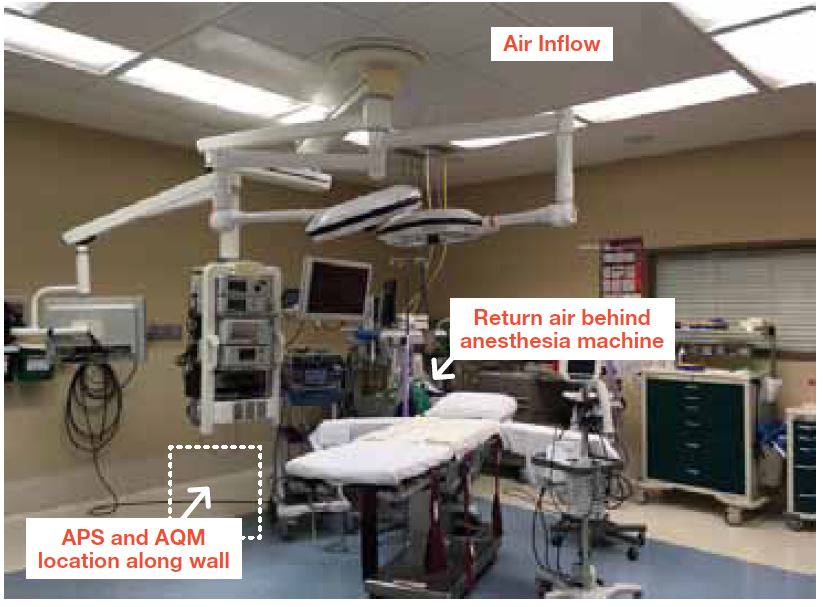 The link between airborne particulate exposure and Atherosclerosis, Alzheimer’s Disease, Dementia, Declining Cognitive Function, and Hospital Acquired Infections has now been established. Traditional filtration methods do not have the ability to transfer the critically small contaminants for capture within the environment, however, Particle Control Technology provides measurable and impactful results.

The ability to deploy Particle Control and Pathogen Inactivation Technology exists today and could improve clinical outcomes and reduce the $20+ Billion annual cost of Hospital Acquired Infections and reduce inflammatory and degenerative diseases. 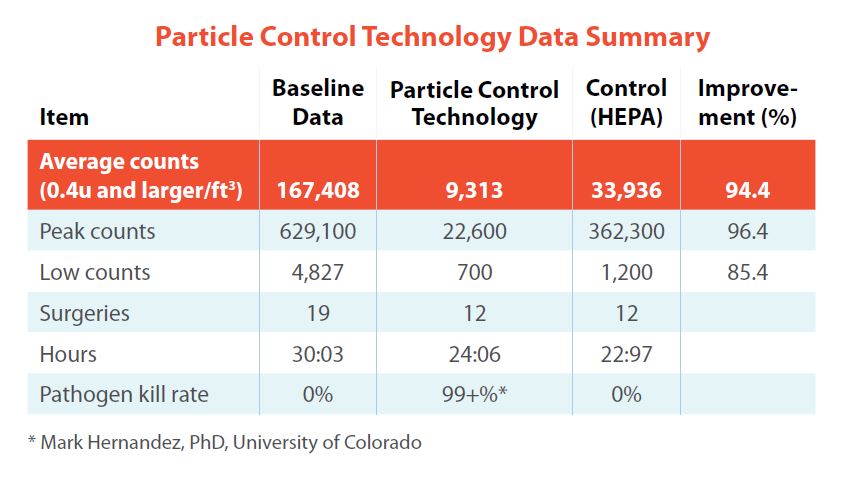 SecureAire is headquartered in Oldsmar, Florida. The Company is the industry leader in Particle Control Technology, which is based upon technologies developed and employed in Semiconductor Cleanrooms. SecureAire has advanced and developed highly sophisticated air purification technologies that make “air flow the dominant transport mechanism for airborne contamination.”