Todays Healthcare System faces the continuous challenge of increasing costs due to the 1.7 Million patients that are hurt by Hospital Acquired Infections (HAI’s) and tax the system by an estimated $20+ Billion each year. One of the more recent challenges concerning Hospital Acquired Infections in Cardiac Surgery is the airborne transmission of Mycobacterium chimaera, which has been linked to operating room equipment, deemed critical to the success of these surgical procedures.

SecureAire recently researched and investigated the airborne transmission of Mycobacterium chimaera and found Particle Control Technology to be one of the few potential solutions in reducing this transmission.

A White Paper Prepared by SecureAire

Each year in the United States, Hospital Acquired Infections (HAI) hurt 1.7 Million patients, cause 75,000 deaths, and cost our health care system more than $20 Billion 1,2. The in-hospital transmission of viral, bacterial, and fungal pathogens has been studied extensively. Over the past twenty years numerous national, regional, and local initiatives have resulted in significant improvements in infection rates. However, the indiscriminate use of antibiotics has also resulted in the development of “super-bugs” that have become resistant to the same antibiotic treatment, with a few strains now resistant to all drugs.

Successful methods to mitigate pathogen transmission include hand washing, the use of hand sanitizers, disinfectants, UV treatment of surfaces, mechanical isolation, respiratory isolation, and others. In general, the improvement in infection rates has now plateaued. More recently, cases of increased infection from airborne contamination sources have developed. Forced-air warming (FAW) devices and heater-cooler units (HCUs) utilized in operating rooms have been shown to harbor pathogens that have been traced to some HAIs.3,4 Many hospitalized patients are immuno-compromised, putting them at an even greater risk for a HAIs. 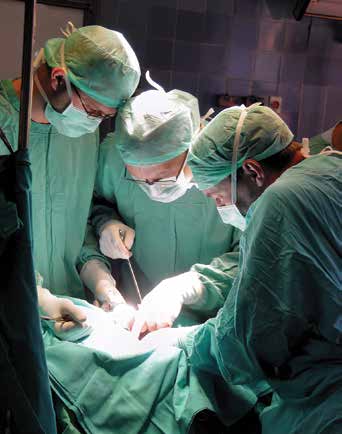 Airborne transmission is a particularly difficult problem, and various methods have been tried with limited success. Some ceiling-based air ventilation systems produce a vertically directed laminar flow of air towards the sterile operating environment. Lateral laminar flow systems aim at reducing vertical movement of particles and pathogens. The protective advantage of these laminar flow systems compared with whole-room, turbulent, clean air ventilation have been questioned.

Some have suggested that laminar airflow is superior in reducing surgical site infections in vascular patients,5 while others report an increase in surgical site infections in orthopedic surgery after use of laminar airflow systems.6 Disrupting laminar airflow by the use of forced-air warming systems that prevent hypothermia have been demonstrated to increase infections in total joint surgery.3 This has become such an issue with infections that forced-air warming systems are no longer utilized in the United Kingdom.<sup3,7 Unfortunately, the variations in technology, methods, and outcomes, leave healthcare providers fearing the next outbreak while searching for ideal methods.

Over the past four years, some hospitals with cardiac surgery programs have noted an increase in infections and deaths attributed to the use of HCUs.<sup4,5 Investigations have identified the source of these surgical site infections as Mycobacterium chimaera that had been aerosolized from the buildup of HCU biofilm that contaminates operating room air. These devices are used to heat and cool patient’s blood as it circulates through the cardiopulmonary bypass machine (Figure 1). Mycobacterium chimaera is a nontuberculous mycobacterial species that causes cardiovascular, pulmonary, and postsurgical infections. 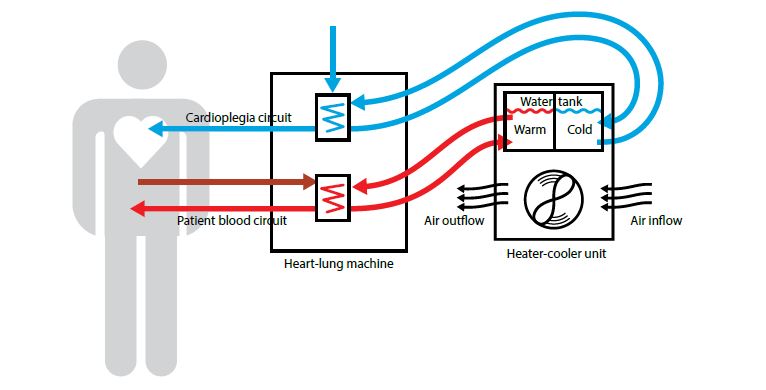 The buildup of biofilm on internal HCU components serves as a breeding ground for pathogens. From here, pathogens are aerosolized and contaminate the operating room air.5 The considerable horizontal airflow generated by heater–cooler units causes disruptive air currents within the vertical airflow, which is a likely mechanism for transmission of pathogens from a contaminated HCU to the surgical site.

Recent research demonstrated that even when an Ultraclean air ventilation system was used, the aerosolized Mycobacterium chimaera from the HCU biofilm source caused surgical site infections and death. They investigated transmission of this bacterium from HCUs to the surgical field by using a thermic anemometer, particle counter, videotape of an operating room equipped with an ultraclean laminar airflow ventilation system, and bacterial culture sedimentation plates in a non-ventilated room. Within 23 seconds, smoke from the HCU reached the surgical field, an indication of the speed of aerosolized transmission. Culture plates were positive for M. chimaera up to fifteen feet from the HCU in the test room. These experiments confirm airborne transmission of M. chimaera aerosols from a contaminated HCU to an open surgical field despite Ultraclean ventilation.7 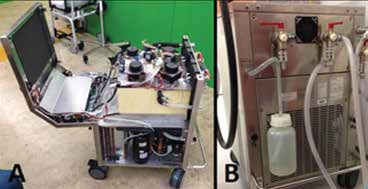 Figure 2 A&B: Heater-Cooler Units used during cardiac surgery. Biofilm develops on internal surfaces harboring bacteria which are aerosolized when the fan is activated.

These findings substantiate the airborne transmission pathway for outbreaks of Mycobacterium chimaera cardiac implant-related infections.6 They provide prototypical evidence of the failure of Ultraclean airflow ventilation systems in preventing surgical site infections. And finally, they exemplify the potential infectious risks related to airflow-producing devices in the operating room and the need for Particle Control Technology. To prevent patient hypothermia during surgery FAW devices are commonly used. These have led to 1,000s of surgical site infections in total joint (hip and knee) surgery (Figure 3).

Figures 3 & 4: Studies show that these devices harbor pathogens, or pull them from the air and deliver them adjacent to surgical sites. Further, the heated air and high-velocity air flow disrupt air currents, causing turbulence around the surgical site.8 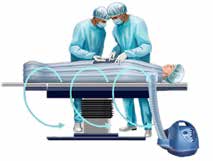 New methods must be employed (beyond traditional ultraclean ventilation) to mitigate the infectious risks during surgery, especially in the setting of HCU use in cardiac surgery and FAW use in orthopedic surgery. These and other works remind us that integrated circuit manufacturing environments are much cleaner than hospital operating rooms. We need to transfer the best-known methods from clean-rooms to the operating room.

A SOLUTION to the CRISIS

Traditional methods of filtration do not trap the majority of airborne pathogens (most of which are smaller than 2.5 microns) and none of them kill the pathogens. In the case of Mycobacterium chimera (Figure 5), its 0.637 micron mean diameter and 2-4 micron length is not trapped, spreading mainly via droplets or particles in the air. Its extremely low mass does not allow air currents to move it far enough to be captured by existing filtration devices. Micro-particles must first be electrostatically conditioned before they can congeal and develop adequate mass to be carried by airflow and captured by filtration media. Even if Mycobacterium are caught, these pathogens continue to be viable unless killed by additional methods. These methods include drying, freezing, and sulfuric acid baths which will kill many microorganisms. However, Mycobacterium are particularly robust and much less sensitive to these methods. 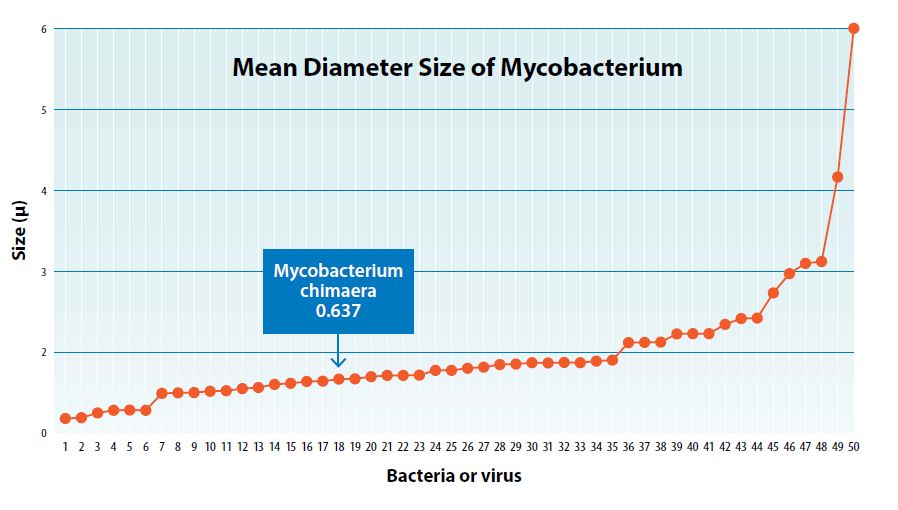 Figure 5: Mycobacterium chimaera are small and not transported by normal airflow currents.

The following laboratory, independent and live operating room studies support the effectiveness of Particle Control Technology and its ability to directly impact the reduction of Mycobacterium from the operating room.

SecureAire embarked on the development of a technology platform to address the critical issues of Indoor Air Contamination
within the Healthcare Environment. This included laboratory, independent and live operating room studies.

Impact on Infection: In a single out-patient orthopedic surgery center particle contamination loads, measured Total Volatile Organic Compounds (TVOCs), and annual infection rates were compared before and after installation of a SecureAire System.

Active Adjacent Operating Room Comparison: The operating room with a pre-filter and the SecureAire ACS MERV 15 system achieved a 96% reduction in particle counts (> 0.4 microns) for six consecutive days when compared to a pre-filter, MERV 14, and HEPA filtration system.

Pathogen Killing Study: Exposure of Bacillus subtilis cells to the electric field of the SecureAire ACS system reduced total viable cell count by 90-99% within three hours. There was no bacterial viability documented beyond three hours.

Active Single Operating Room Comparison: The addition of the SecureAire ACS portable APS-1000X unit into an active operating room resulted in a 49-94% reduction in airborne particle load at all times and during and after surgery (p=0.019, 0.056, and 0.085).

The link between airborne particulate exposure from heater-cooler units and forced-air warming device use and hospital-acquired infections are clear. Traditional filtration methods do not have the ability to transfer critically small contaminants for capture within the environment, however, Particle Control Technology provides measurable and impactful results.

The ability to deploy Particle Control and Pathogen Inactivation Technology exists today and could improve clinical outcomes and reduce the greater than $20+ billion annual cost of Hospital Acquired Infections and reduce inflammatory and degenerative diseases.

SecureAire is headquartered in Oldsmar, Florida. The Company is the industry leader in Particle Control Technology, which is based upon technologies developed and employed in Semiconductor Cleanrooms. SecureAire has advanced and developed highly sophisticated air purification technologies that make “air flow the dominant transport mechanism for airborne contamination.”