The purpose of this paper is not to explain what heat pipes are or how wrap-around Dehumidification Heat Pipes (DHP’s) work. Instead, this paper will dive deeper and focus specifically on controllable wrap-around heat pipes. On some occasions, the space may not need all the reheat the heat pipe’s providing. The hotter the entering air – and therefore the bigger the ΔT – the more heat will be recovered. In many applications, the design summer dry bulb condition when that entering air is the hottest is not when the space needs the most reheat. Controllable wrap-around heat pipes are an effective way to recover as much heat as possible to provide maximum precooling and free reheating without exceeding setpoint. Moreover, the controllability allows for proper sizing at more frequent part load conditions to really optimize energy savings.

The most effective means of heat pipe controllability is via solenoid valves (Model DHP-C shown in Figure 1). The valves are simply staged off and on as needed to provide the maximum amount of reheat (and precooling) without overheating. They are generally wired in 3 or 4 stages and pulled to a terminal box to be controlled by the Building Automation System (BAS). The valves for each stage are staggered throughout the face height to avoid stratification when closed. 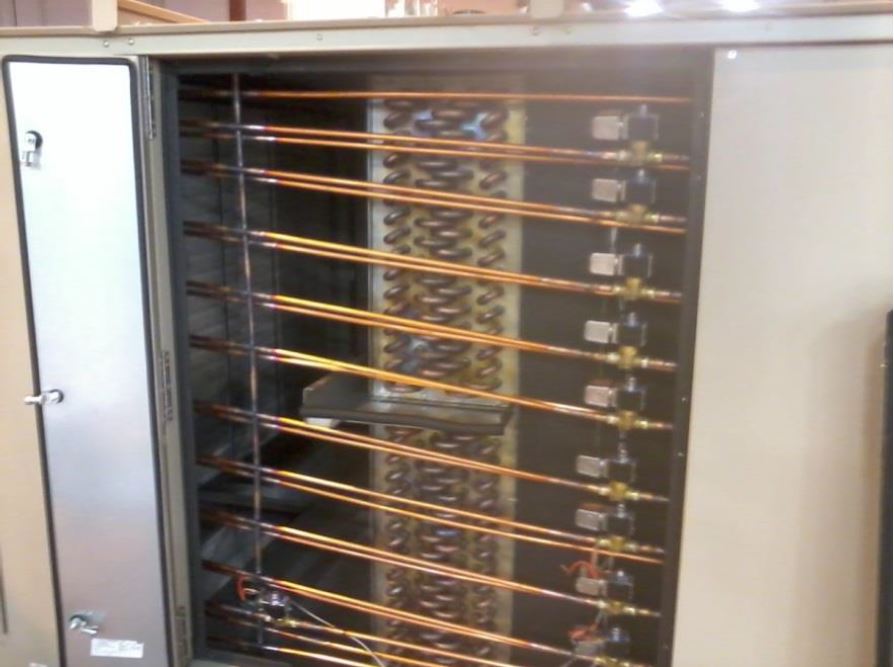 A generic control sequence would be as follows:

When setpoint (or return air temp) is exceeded by X degrees (2°F is common), stage the first circuit off. If after X minutes (5°F is common) setpoint is still exceeded stage the second circuit off…and so on until all stages are closed. Then reverse sequence as air gets too cold. When all valves are open and it’s still too cold, add supplemental reheat (wherever that’s coming from).

An accompanying control schematic is shown in Figure 2. It’s essentially the opposite sequence of staged electric reheat – the valves are energized to shut the heat pipes off when sensors say it’s too hot rather than calling for more electric heat when it’s not hot enough. 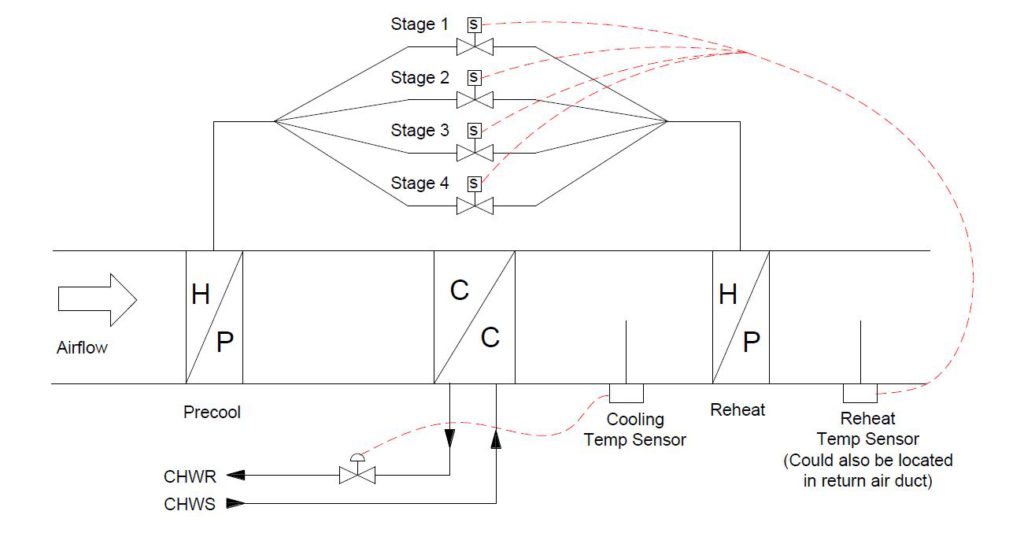 Figure 2: Sample Control Schematic for DHP-C with 4 Stages of Controllability.

For larger systems when the valve count becomes extreme or the overall circuit lengths become excessive – whether due to long fin lengths, greater spans between the precool and reheat modules, or a combination of those – the modules can be connected via common liquid and vapor headers in lieu of individual crossover circuits (see Figure 3). This arrangement then allows for the use of modulating valves in the liquid lines. 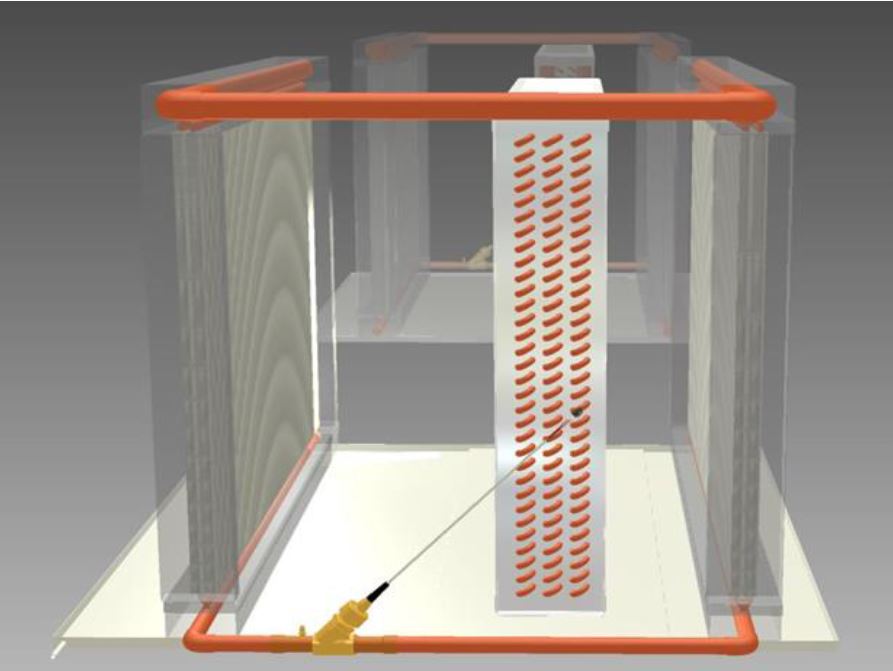 This is what we call a DHP-V as it’s still a Dehumidification Heat Pipe but now the faces have Vertical tubes acting as thermosyphons between the liquid and vapor headers. Though the DHP-V can greatly reduce the valve count and provide more accurate reheat control by modulating the heat recovery in lieu of staging, it’s not as efficient as the DHP-C, more expensive, and can potentially lead to condensation concerns. The use of vertical tubes means there are horizontal fins; therefore, depending on the velocity of the air and how much moisture is being removed, excessive condensation could build up along the bottom of the precool module creating a natural “blank-off” and drastic performance losses. For this reason every DHP-V selection is reviewed on a case by case basis to insure these risks are avoided. And unlike DHP’s and DHP-C’s, they are not selectable within SelectPlus.

One alternative to using valves to control reheat is to simply bypass air around the heat pipe reheat module. One must be careful, however, as this method has its drawbacks. First, as the air pattern is pulled through the bypass dampers it can reduce its coverage along the face of the cooling coil, leadingto less effective dehumidification and dew point control. Sufficient cabinet length would need to be added to allow for proper air divergence. Furthermore, additional length may be needed downstream of the heat pipe to allow for proper re-mixing to avoid stratification. Also, bypass dampers alone would never allow all the air to be diverted away from the heat pipe, which means there is no way to completely “turn off” the reheat as can be achieved with valves. The only way to achieve that would be to utilize face dampers and doing so would only exacerbate the airflow pattern issue and resulting dehumidification concerns. Valves are the only surefire way to avoid these issues from arising without having to worry about the additional cabinet length. The dampers themselves would also take up space within the cabinet, which could lead to increase velocities and static pressure drops through the coil.

The utilization of control valves is about more than just temperature control. When properly applied, they allow the DHP-C to provide greater energy savings by allowing it to be sized for part load conditions rather than design conditions. Consider, for example, a scenario where the DHP-C is receiving 100% outside air and at design that air is 95°F dry bulb. Let’s also assume the cooling coil is controlled to deliver 52°F air and the goal is to supply 65°F air after reheat. Figure 4 shows how this condition is played out by using a wrap-around heat pipe. 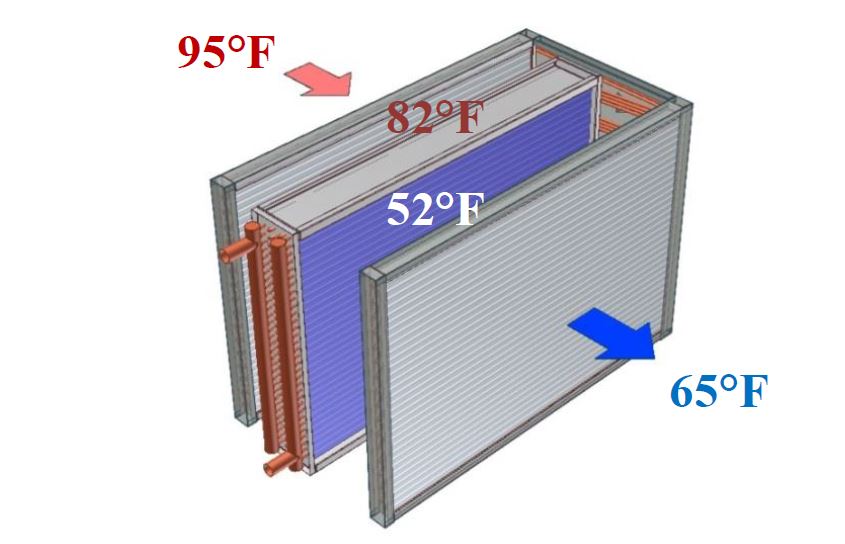 A non-controllable 2-row DHP is roughly 30% effective when the airflow is 450 FPM across the coils and would therefore deliver the 65°F air as needed at that design condition. This heat pipe would therefore not need control valves as it would never provide too much reheat. But that design condition is the worst case dry bulb scenario and rarely occurs (only 1% of the time per ASHRAE). So at all other conditions the heat pipe will see a smaller ΔT and both precool and reheat less, meaning more energy is required to make up the difference. The heat pipe is now missing out on many hours’ worth of BTU’s by simply being sized for design conditions.

In contrast, let’s consider sizing the DHP to deliver the same desired 65°F air after reheat when the outside air is only 85°F dry bulb. This requires a 4-row DHP in lieu of the 2-row DHP as it now needs to be closer to 40% effective to recover the necessary heat. And control valves are needed to trim the unwanted reheat when that outside air is warmer than 85°F. As Table 1 shows, though doing so would roughly double the cost of the heat pipe, because it’s now sized to provide maximum precooling and reheat over a greater period of time it will of course provide greater energy savings. The payback could take a little longer since the cost of the heat pipe has increased, but once paid back it yields 25% more savings year over year!,/p>

Diving deeper, it’s also worth noting that DHP-C’s can be partially controllable. If there’s a time when no reheat is desired then all circuits must have the ability to be staged off. A DHP-C would have to be fully controllable to deliver maximum cooling without any reheat. In this scenario, the cooling coil would need to be sized to handle full capacity as well due to the loss of the precool effect when full controllability is deployed. But if some reheat will always be needed then there’s no need to have valves on every circuit. Not only will fewer valves reduce cost, but as the bottom row of Table 1 shows, the reduction in friction within the circuits due to fewer valves will actually increase effectiveness. This, of course, will increase energy savings even more (a 40% increase annually versus the 25% increase the fully controllable option would offer) while accelerating the payback period. Like the DHP-V’s, partially controllable DHP-C’s are not selectable within SelectPlus and shall be reviewed on a case by case basis.

So, the next time the double dose of benefits from the free cooling and equivalent free reheating along with the potential dew point depression make the wrap-around heat pipe the best solution, consider making them controllable to not only regulate how much reheat is being provided but also to allow for optimal sizing at more common part load conditions rather than sizing for those rare design conditions. When the goal is to save energy, making these heat pipes controllable will often increase their saving potential by maximizing their usage over a longer period of time. And if some reheat will always be needed, consider making them partially controllable to get an even bigger bang for the buck.

For more information about Heat Pipe Technology and the products they manufacture, please reach out to us, or visit our website. You can also stay connected by following us on Twitter, by connecting with us on LinkedIn or Google+, or by watching us on YouTube!